This is a new poem, which actually means I'm not finished with it yet. As I rule, I don't consider a poem finished until it has rested for at least a month without being changed, so I'll anticipate some changes later, It was inspired by an activity during a writing workshop with the Alabama Writers' Conclave just a week ago. 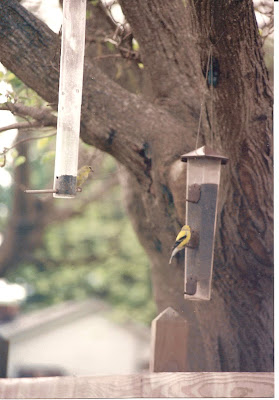 The years had taken their toll.
There was no choice.
Nothing to be done
Except to take it out.
The massive cottonwood tree
Had long filled that space.
Gnarled branches had cast a wide canopy of green
Over half the yard.
Twisting scarred roots elevating 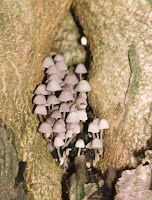 Above stony ground
Had spent decades traversing our backyard.
Open moist knot holes
Sometimes held dainty mushrooms
Fed by rainwater and debris.
It had been the site of many toddlers’ games
Improvised beneath the old tree’s branches.
A family picnic had gathered there
As elderly grandparents, young nieces and cousins
All came to bless our infant daughter.

Yet the years had taken their toll.
The aged tree
Splitting under her own weight
Was removed.
She came down with great ceremony and precision
As nimble men with buzzing saws and safety harnesses

Carefully removed limbs in sections.
Top most and outermost branches first
Followed by middle limbs
Until only the center remained.
Finally the aging trunk
Was pared sown by massive saws,
The stump ground down
Until nothing remained.

An empty space
Was opened up.
The ground was left exposed
To searing sun
And drenching rain.
It reminded me of that
Empty space in my heart,
That space once filled
By generations.
The old ones have departed this life,
Nieces and cousins now scattered,
The young toddlers are now grown and moving on.
That empty space - now open
To sun, wind, and rain.
Nothing left but to grieve
And remember;
Grieving the emptiness,
Remembering the times.

In the corner of the yard
Stands a young oak sapling.
Straight and clean
She reaches upward.
Having sprouted voluntarily
We let her grow.
We let her be.
She will one day fill another space.
One day her arms
Will offer comforting shade.
Perhaps a future picnic will be spread
For a new generation of toddlers at play.
An older, wiser, more grateful one
Will savor those moments
Beneath newly gnarled branches,
Standing among newly spreading roots.
Memories of empty spaces remain
As hopes for new spaces
Take root and grow.