Growing Up under Southern Apartheid, Part 9

Learning to Read – and Other Important Things 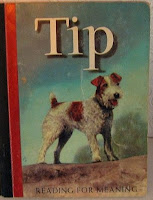 I’ll never forget the day the first-grade teacher, Mrs. Mary Barron, began teaching us to read. She went to a cabinet in the back of the room and pulled out a stack of “Tip” readers. There was a colorful picture of a dog named Tip on the front. She put one on my desk and said, “Charles, do you want a book to look at?” With that, all the kids in the class began raising their hands asking for a book to look at, too. Once everyone had a book, Mrs. Barron told us that we were going to learn to read this book. All of the excitement was suddenly deflated once we realized that there was work involved.

But learn we did. We read the Tip book, and then we went on to Dick and Jane and other children’s storybooks. I enjoyed the stories, and after school as my brother and I walked home from school, I would tell him the story we read that day. He was in the sixth grade and was impressed that I didn’t just tell about the story, I told the entire story verbatim. “How can you remember all that?” he remarked. He was so impressed he would sometimes bring his sixth-grade friends around during recess and get me to tell them a story. After a while, I would get tired of telling stories and would head out to the playground to join the other kids in my class.

While we did the basics of reading, writing, and arithmetic, there was much more that was instilled in us at school. In the first and second grades, we began each day reciting the Pledge of Allegiance, followed by the singing of “My Country, ‘Tis of Thee.” In the third and fourth grades, there was often a devotional reading at the beginning of the day, but that was not a hard and fast rule as I remember it. Those kinds of things seemed to be up to the individual teacher. 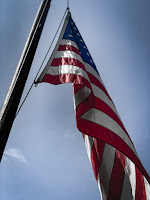 The fifth and sixth grade classes had flag duty. Students were responsible for raising the flag each morning and lowering it at the end of the school day. The process required two people, making sure the flag never touched the ground and being careful to properly fold it into a triangle after taking it down. I witnessed my first flag-burning at school; it may have been when I was in the third grade. Our flag had become worn and tattered and we needed to replace it. The principal at the time, Mrs. Hinsdale, supervised in one of the two proper means of disposing of an old flag (burning or burial). In this case, the chosen method was to burn the old flag. All of the school gathered around as the old flag was dipped in kerosene, run up the flag pole, and then torched. Afterward, the new flag was raised.

Fifth and sixth graders were also assigned lunchroom duty. This was another job requiring two-person teams. Lunchroom duty basically involved waiting tables. We did not have a cafeteria-style lunchroom. It was just a kitchen with large pots and pans. Miss Lindy would serve up the plates, and the students who had lunchroom duty would set the plates at each table for all of the grades. Once each place was set, the kids would file in and take their place at the table. Mrs. Barron, the first and second grade teacher, was the lunchroom supervisor as well. She would lead all the children in “singing the blessing” before eating:

“Thank Him, thank Him, all you little children,

Thank Him, thank Him, all you little children,

Near the end of the meal, the lunchroom assistants would get the desserts which Miss Lindy had set out on trays, and serve each student their dessert. After lunch, everyone would take their plate to the kitchen, rake off any leftovers into a big garbage can, and place their dishes in the sink. One of the local farmers would come by each day to buy the scraps which he would feed to his hogs.

I can remember a few days at school that were set aside as workdays. These were days when the teachers and the students all set about to do a major clean-up. Usually, these workdays involved sweeping, dusting, wiping down walls and window sills, and burning trash. There were two big metal drums off to the side where trash was collected then burned. There was one day I remember when the wooden floors in all of the rooms had to be oiled down. This required moving school desks out so that the floors could be mopped with oil. Afterward, we had to be careful for a few days because the floors would be slippery. Some of the kids figured out that if they ran f down the hall and dropped to their knees, they would slide on down the hall. It soon became a contest to see who could slide the farthest.

Those workdays to us kids were a refreshing break from having to sit attentively in the classroom. Most of us thought nothing of it.  One of my classmate’s parents had immigrated from The Netherlands to run a dairy farm in Jackson’s Gap. After one of our workdays, his father let his disapproval be known to the teachers. “I send my son to school to learn, not to verk. If I want him to verk I can keep him home on the farm!”

Looking back at our educational curriculum, our first-grade readers reinforced the comfortable white world that most of us were accustomed to. All of the colorful pictures depicted rosy-cheeked white children living in nice houses with white picket fences. Fun with Dick and Jane, however, was not just a Southern phenomenon. Those were part of the nationwide reading curriculum. In that sense, the rest of the nation served as co-conspirators in maintaining a segregated South.*

In our normal school day, the only Black person we encountered was Miss Lindy, the cook in the school lunchroom. We didn’t even have to encounter Black people in our textbooks, except for the occasional social studies class. There were two exceptions, however, in my elementary school experience.

Once when I was in the fourth grade, Mrs. Mary Railey’s class, a young Black girl came into the classroom to hand the teacher a note. Mrs. Railey looked at the note and nodded, then left the room with the girl. Everyone wondered what the little girl was doing there. One of the kids wondered if that little girl was going to try to come to school with us. When the teacher returned, someone said, “Mrs. Railey, that girl better not come to school with us.” Mrs. Railey scoffed and said, “Oh, she’s not coming to school here, you can stop that kind of talk.” She then moved on with the classwork at hand, and the girl with a note remained a mystery. Mrs, Railey was the wife of Hugh Railey who ran the store that serviced the Black community (see Part 5), so there is no telling what the incident with the girl and the note may have been about.

The other exception came that same year when a gypsy family moved into the community. They brought their son, George, to be enrolled in the class. Mrs. Railey talked to the class ahead of time to make sure we welcomed George, who was dark-skinned due to his Romany heritage. The class welcomed George heartily that first day and invited him to play baseball during recess. He was a bit awkward at the game, but so was I (never being the athletic one). In the classroom, George was not at our scholastic level. Mrs. Railey had to make some accommodations to take him aside separately so she could teach him at his level. George was not in school the entire year because his family moved on to Georgia.

For most of us growing up in Jackson’s Gap, our school days reflected an idyllic time. We were nurtured and protected and had little awareness of the winds of change that were beginning to shake the foundations. My years at Jackson’s Gap Elementary School ran from 1961 to 1966. Our school days were quiet and stable while beyond those rural hills there was unrest brewing. George Wallace was making his famous stand at the schoolhouse door at the University of Alabama, Martin Luther King, Jr. was leading marches in Birmingham and the historic March on Selma would become known as Bloody Sunday. The effects of that unrest would slowly and quietly make their way into our community.

* It was not until 1964 that the Dick and Jane reading series of books added some Black people in the books' illustrations. A Mental Floss article by Mark Mancini, "15 Fun Facts about Dick and Jane" states that in 1964, "As the nation finally outlawed public segregation, Fun with Our Friends added an African American family to Dick and Janes's neighborhood."

Posted by Charles Kinnaird at 5:00 AM No comments: 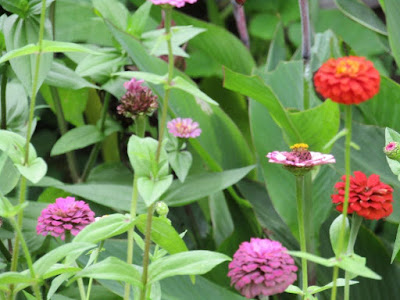 a patch of zinnias
conveys the many stages
of life unfolding

-
Posted by Charles Kinnaird at 5:00 AM No comments: